Foster dogs will be listed in the order that I had them, the current dog being at the top of the page. I am starting the list with my 22nd foster dog, Tweed. He is the dog I had at the time I started this blog.
Almost all of my foster dogs are either Border Collies or Border Collie mixes. We are located in Redding, CA.

What a fantastic young boy Tucker is! At only 1 or 2 years old, he’s still a baby for a Border Collie. He is very friendly with people and other dogs. Cats are questionable at this time. He gets along wonderfully with his foster sisters, and all other dogs that he’s met while in foster care. He became instant best friends with Stella, his 5 month old foster sister. They have spent half their time together wrestling, chasing, and playing. Tucker seems to be very playful – his first day in foster care, he was already playing with toys! He especially enjoys chew toys – Kongs and Nylabones.
Tucker came into a local shelter as a stray, and was adopted shortly after. He was returned to the shelter after just six days, then landed himself in rescue a few days later. He was very happy to be out of the shelter, the first thing he did was run laps around his foster moms back yard! Tucker definitely has energy to spare, but he also knows how to calm down after he’s gotten some of his crazies out. It seems he only has two bad habits, and these can be fixed fairly easily – lightly jumping up on people, and putting his paws up on things(kitchen counters, especially). He’s just curious and wants to know what’s up there.
Tucker is food motivated and well behaved from what we’ve seen so far. He has not tried to chew anything that he shouldn’t, hasn’t caused any problems with his foster siblings, and hasn’t pottied in the house. He is a great dog that will make a wonderful companion for someone.

Stella is a fantastic young pup who loves to be around her people. We are thinking she is a Border Collie/Pit Bull mix and estimate her to be around 5 months old. She is HAPPY! All the time! She doesn’t know a bad day. Stella loves to play with toys – she has a hard time choosing which one she wants to play with. She usually just sits on a pile of toys and takes turns playing with each one. Stella loves to give sweet puppy kisses whenever she gets the chance. She’s a very loving and attentive young girl with a lot of potential. She is a typical puppy in that she is mouthy, a chewer, and has energy to burn, so she needs someone that’s willing to work with her on this. She is a lovely pup that will reward her people with a lot of joy and fun times. With proper training, she can become a stellar dog.

Dallas is an amazing and beautiful dog. He came into the shelter as a stray, and his owners were notified that he was there but they never came to get him. I went to the shelter with the intention of pulling a Border Collie, but that dog and I just didn’t “click”. I saw Dallas and immediately fell in love. He was 15 pounds overweight and had a very stiff walk. We took him in to be x-rayed, which revealed two torn cruiate ligaments in his knees. Thankfully, he did not need surgery! After joint supplements and pain medications, he is feeling much better and started to walk normally. Dallas gets along wonderfully with other dogs, cats, and chickens. He loves to go for his daily walks but is also content to lay around with his people all day. He is 6 years old but has a lot of life left in him! 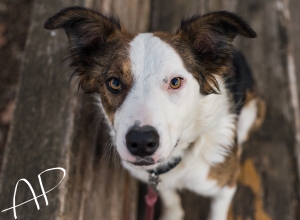 There’s so much I could say about Atom. He was found wandering the property by his foster parents house. After several weeks they managed to catch him, and brought him in to the local shelter. After that, it was only natural that he go right back to where he started – he ended up coming into Border Collie Rescue from the shelter, and being fostered by the people who found him in the first place. They absolutely adored Atom and he was with them for a very long time. He was a fantastic dog – a bit shy – and I loved him to pieces. After a while it was decided that he will come stay with me for a week or two so that I can get better pictures of him in a home environment and write him a new bio. This worked very well for him, and within just a few weeks he was adopted. This is after many, many months in rescue! It was very bittersweet for everyone, seeing Atom leave to his new home. But he found a home, and that’s what’s important. Atom was the last dog I fostered for Border Collie Rescue.

Wow, what a dog!! Kipper is absolutely stunning, he could be a supermodel. To be honest, he did drive me a bit crazy. He had some behavior issues such as being extremely territorial towards other dogs on “his” property. However, he had a lot of potential and last I heard from his adopters, he was doing great. He is very friendly with people and VERY smart! 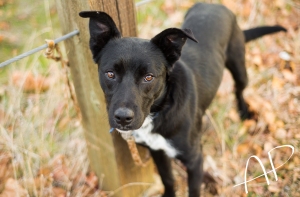 I don’t have much to say about Archie, because he was only with me for about two weeks before being adopted. He came to me a bit on the thin side but we put weight on him. He is very friendly! I am writing this several months after he was adopted, so it’s hard for me to remember much about him. If I remember right, he did get along wonderfully with my other dogs, cats, and even chickens. All I remember is he was a great dog to have around, and he found a fantastic family!

Dakota is a beautiful Husky/Samoyed mix that spent his life outdoors on a chain, guarding an illegal marijuana growing operation. He was seized along with a German Shepherd. Dakota had a severe case of heartworm. He had been desperately needing a foster home for weeks, because he could not start the treatment for heartworm disease while he was in the shelter. Dogs that are infected with heartworm must be kept very calm so that their heart rate does not go up. I convinced my parents to let me foster him, I could not stand the thought of him dying in the shelter because nobody would step up to foster him. Poor Dakota had to spend several months in his crate 24/7, with the exception of short potty breaks a few times a day. He could not be out in the house as he would not be calm. He had to be pottied on leash, because he was SO happy to be off leash in the yard, out of his crate, that he would start sprinting around. This would raise his heart rate, which as I mentioned above, is a HUGE no-no for dogs on heartworm treatment. Dakota was a very sweet dog. Despite being locked in a crate for months on end, he always had a smile on his face and was always happy to see someone walk in the room. We made sure to give him extra pets every time he was out, but only on his head and shoulders as the shots they give the dog in the spine for heartworm treatment cause severe pain. I accidentally brushed against his back with my hand, and Dakota screamed and dropped his hips to the ground to get away from me. THAT is how painful it is. Please, please keep your dog on heartworm prevention so that they do not have to go through what poor Dakota went through. Thankfully he survived the treatment, but not all dogs are so lucky.
Dakota was taken in by a rescue whose dogs usually get adopted within one week.

Tweed was surrendered to a shelter for escaping his owners property, we saw him in the shelter and took him into rescue.

He is such a funny, happy dog. While he loves to run and play, he’s equally happy to have lazy days and do nothing but lay at my feet the entire day. For the most part, he ignores my cats, and gets along great with other dogs. We do have the small issue of him wanting to hump every dog he sees, though. He did not know how to mind another dogs personal space when he came to me, but my Nelly quickly taught him that it’s not okay to invade her personal space. 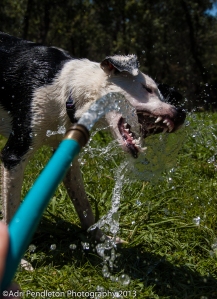 He likes to decorate my yard. Half of my yard is a forest of oak trees, and Tweed has carefully selected the sticks that he finds suitable, and strategically placed them in my yard. They are of all shapes and sizes, and spread across his favorite ares, to ensure that he can grab any stick at any time he needs one.

He loves to chase the water coming out of the hose. Not a lot of dogs like doing this, so I’ve been having a lot of fun with it!

No dog is perfect, and some need a little help to get to the point where they are adoptable. Tweed has severe separation anxiety and is terrified of all people. I am working with him to fix these issues. He will be put up for adoption around August 8th, with very specific requirements for potential adoptive homes. I expect it will take a while to find that “perfect” home for him, but I will not rest until I do!

4 thoughts on “My Foster Dogs”